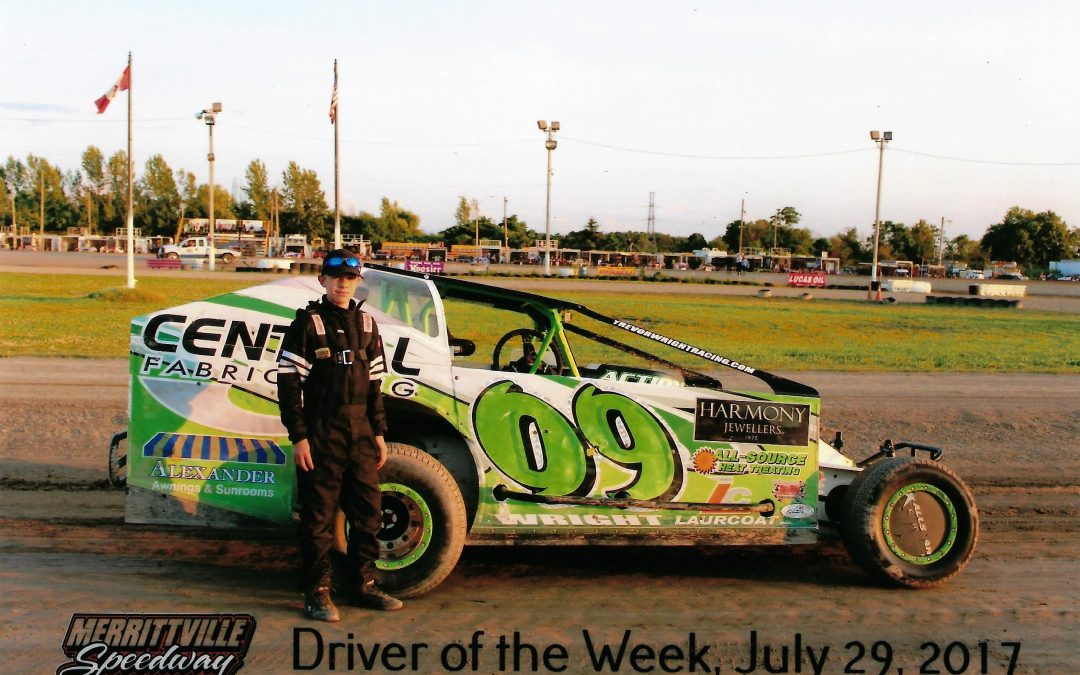 Beamsville, Ont. – August 17th, 2017 – Although the racing season is winding down, Trevor Wright is continuing to climb to new heights. The 15 year old has shown great progress and promise in his first full season in the DIRTcar Sportsman division at Merrittville Speedway.

The 2016 Novice Sportsman champion has shown very little trouble transitioning to competing with veterans on a weekly basis. In recent weeks, the youngster has racked up four top ten’s against the very deep and talented roster of drivers at Merrittville. A pair of seventh place finishes along with an eighth and ninth in feature competition combined with his first career heat win and two seconds has set his confidence soaring.

His achievements haven’t gone unnoticed either, as he recently won the driver of the week award following a performance where he led six laps of the feature race and ran second to veteran Jay Mallory for several more laps. A late race caution foiled his hopes of a top five finish; however the run garnered much attention from fans and fellow competitors.

The success hasn’t come without a learning curve both on and off the track. “Learning the car and the setup has been trying at times” said Wright. “The biggest challenge for me though has been earning the respect of the other drivers on the track” he added.

The team has had valuable help along the way. “I have to give credit for my recent improvements to the Gaboury ‘s” noted Wright. “They’ve taken me under their wing and have been teaching me a lot about setup and how to handle driving on different track conditions. I really appreciate it and am trying to learn as much as I can”.

The season hasn’t come without some adversity as the teams visit to Ohsweken Speedway on July 25th didn’t go as planned. While making a pass for the runner-up position in the B-Main, the driveshaft on the No. 09 broke and damaged the car heavily. It left the team scrambling to make the next points event at Merrittville. If not for the assistance of sponsor Alexander Awnings, Trevor may not have had the parts needed to race just four days after the mechanical woes.

Heading into the stretch drive, Wright sits inside the top ten in points at Merrittville Speedway and is the leading contender for the rookie of the year award. He is currently meeting his goals and hopes to finish on a strong note to better his expectations.

At the conclusion of the regular season, Wright and the team intend to compete in some of the major fall events taking place across the northeast. The experience of racing at new tracks and competing against different drivers will be valuable in the learning process.

In the meantime, fans can expect to see Wright battling it out down to the wire at Merrittville Speedway on Saturday nights. Race time at the Thorold, Ont. track is 7pm and more information can be found at www.merrittvillespeedway.com.